In this blog post we’ll share some of the highlights from this year’s IBM Vision conference, including a look ahead to some of the things that are either coming soon or are even available today from IBM and QueBIT.

The IBM Vision 2017 conference, which took place May 16-19 in Orlando, Florida, was bittersweet for me and other attendees in that it was the final IBM Vision conference.

The Vision, Interconnect and World of Watson conferences are being combined into a mega conference called IBM Think, to be held March 19-22, 2018 in Las Vegas, NV. While IBM Think will be a must-attend event for those in the Financial and Operational Performance Management (FOPM), Sales Performance Management (SPM) and Governance, Risk and Compliance (GRC) spaces, the larger setting may prove challenging to reproduce the intimate community experience that thrived at IBM Vision—indeed, I’ve been lucky to have seen so many of the same faces over the 5 Vision conferences I attended.

Although we are sad to see the end of IBM Vision, there is so much to be excited about in the world of analytics! 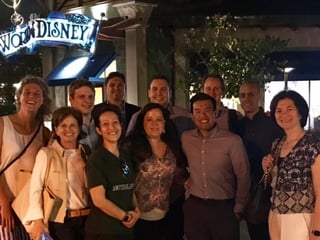 Putting Together the Pieces of the Analytics Puzzle

The IBM Vision conference evolved primarily out of the Cognos Forum and Clarity conferences, and largely took its current form in 2012. The approximately 1,800 attendees this year may not have witnessed a major software launch or announcement by IBM, but one thing we did see was pretty remarkable: many customer sessions sharing the successful implementation and integration of multiple IBM analytics products.

Thinking back to Vision 2012 or 2013, for example, many of those attending, especially longtime TM1 customers, may have been introduced for the first time to IBM SPSS Modeler, IBM ILOG CPLEX, Clarity FSR (now called Cognos Disclosure Management, or CDM), Cognos Command Center, Cognos Integration Server, and even Cognos BI (now called Cognos Analytics, or CA). This was overwhelming at the time: how or why those additional products could be used to solve business problems, produce significant ROI, and provide superior, integrated analytics solutions may have seemed like a fantasy to many customers.

Fast-forward to Vision 2017 and not only were there many sessions that showed that true value of these products and solutions, but QueBIT was directly involved in presenting 7 of those sessions, many of which demonstrated precisely these kinds of superior, integrated solutions using IBM software:

QueBIT takes great pride in its ability to help our customers understand how they can put all of these analytics pieces of the puzzle together to solve their business problems: planning, descriptive, diagnostic, predictive and prescriptive analytics. We’re delighted to have had 7 different speakers contribute to the great content at IBM Vision!

The other main area of focus of the IBM Vision 2017 conference was squarely on IBM’s continued investment in general user experience improvements to all products through its IBM Design Thinking  teams, and even more particularly on the TM1/PA product. One of the highlights from the keynote presentations, which you may view at any time on Vision 2017 livestream, was TM1/PA’s continued high profile among industry analysts and customer surveys conducted within the last 6 months:

In addition, we were very excited to learn in the keynote presentation and other breakout sessions that IBM is planning to stay ahead of the competition with additional enhancements to administration and management in the TM1/PA product. Within the Workspace (PAW) component of PA/TM1, IBM is actively working on adding advanced server monitoring capabilities and support for things like:

Although there is no official release date or final feature set yet for this set of Workspace Management functionality we are very much looking forward to this initiative, since these are areas that all TM1/PA developers have struggled with. This is especially true of the first two points: although some 3rd party tools have attempted to fill these TM1/PA management & administration gaps in functionality, it seems important to finally have them baked into the core product.

Finally, there was also a lot of content at Vision focused around the most recent TM1/PA feature to be released by IBM: support for multiple hierarchies. As we’ve noted in other blog posts, this is a major feature that we think will ultimately change the way we design TM1/PA models of the future, as well as simplify integration into other IBM products like CA/BI. QueBIT’s own Technology Manager, Ryan Clapp, was lucky enough to participate in an IBM session on TM1/PA hierarchies with IBM Offering Manager, Dave Corbett, and the “godfather” of TM1, Manny Perez. In that session Ryan gave an honest assessment of the state of hierarchy support based on QueBIT’s experience and feedback regarding this exciting feature, some of which is summarized here:

There is so much more that came out of the Vision 2017 conference that I wasn’t able to share here, but hopefully this provides a helpful summary of some of the highlights from the world of IBM Analytics and QueBIT! If you would like to learn more about anything in this post, just tweet @AskQueBIT or visit quebit.com/vision2017.