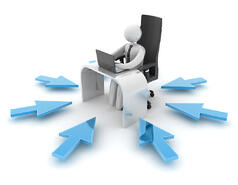 The “C” in CEO, is short for “Chief”.  The Merriam Webster dictionary defines Chief to mean: Highest in rank or authority; most important; the person who is the leader of a group of people, of an organization, etc.  Today we are accustomed to the Chief Executive Officer (CEO), the Chief Financial Officer (CFO), the Chief Information Officer (CIO), the Chief Marketing Officer (CMO) and in some organizations other chiefs like the Chief Technology Officer (CTO), the Chief Strategy Officer (CSO) and the Chief Risk Officer (CRO).

Chiefs have been around since man first graced the earth.  However, chiefs in business, certainly ones with the word “chief” in their job title, are quite a recent thing.  A 1999 University of Michigan study written by David W. Allison and Blyden B. Potts found that in 1955 only one of the 200 largest industrial corporations in the United States used the title Chief Executive Officer (CEO) to denote its chief executive.  By 1975 all but one of these firms had a CEO.  A similar study from the University of Princeton written by Dirk M. Zorn found through an examination of 400 of the largest corporations, none of them had a Chief Financial Officer in 1964 but more than 80% did by the year 2000.  The main catalytic event was an ambiguous change in accounting rules in 1979 issued by the Federal Accounting Standards Board (FASB 33) in response to the corporate funding crisis of the 1970's.  As the need for financial controls became greater, companies needed to establish an authority at the top of their organizations that would be fully responsible for the compliance of control related regulations.

Whether driven by changes in law or simply changes in common practice, the establishment of new types of Chiefs in companies shape the way in which companies are run and this has also created new potential career paths for those so inclined to follow a particular direction.  Almost all of us that have jobs are on a career path that would ultimately lead us to a C-Level position if we were fortunate and worthy enough to reach the highest level of our particular chosen career path.  Given that the notion of the Chief in business is a relatively new thing, and that new types of Chiefs have continued to emerge over the past forty years, it would be prudent for anyone interested in developing their own careers to be at least aware of the latest trends in C-Level positions.  It would also be of interest to consider what is coming in the future and what might be the next great emerging C-Level position.

Given the emerging importance of Analytics with respect to long term and probably short term futures of all companies, it should be of no surprise to learn that a new C-Level role is emerging: the Chief Analytics Officer (CAO).  The CAO is an executive-level position that transcends all other C-Level positions and this role will increasingly become as important as the CEO and the CFO.  It is also likely that the next generation of CEOs will increasingly have CAO on their career resumes.  If you can demonstrate measurable success in shaping better and faster decisions, surely you are worthy of consideration to take on the ultimate leadership role in companies?

A recent article by Dhiraj Rajaram published in Forbes identified Cleveland-based KeyBank, one of the top 20 largest banks in the US, as an organization that has established the role of CAO to institutionalize data-driven decision making.  The CAO at Key Bank leads an Insights group that teams with all of the Bank’s departments. It is interesting to note that at KeyBank the marketing team reports to the CAO and sits side-by-side with the CAO on the Insights team.  This contrasts with many other companies where the analytics team reports to marketing.  Rajaram’s article reported that before KeyBank centralized analytics, it used to make a lot of decisions by committee, with less focus on the numbers. Now, everything is numbers based and all decisions are essentially Net Present Value positive driven.  All decisions have to be justified in data terms and the use of analytics forces the discipline in how to think about the right answers for customers and other important stakeholders at the bank. If you apply the right tools and techniques against the available information, you will begin to find that the data does not lie!

Our world at QueBIT is all about Analytics.  We work every day with clients to advise them on their own road maps for analytics.  Whether this be traditional business analytics, things like financial and operational metrics reporting, planning, forecasting or what if profitability modeling, or more advanced analytics like predictive and prescriptive analytics, or indeed the integration of business analytics and predictive analytics for things like demand planning, this is the world that we live in and the world that we continue to learn about and become experts in every day.  I tell our consultants all the time that what they do on a regular day to day basis has real positive impact on companies.  In some cases the work is game changing for customers.  Our consultants are the Chief Analytics Officers of the future and I’m sure that any Fortune 500 company would be delighted to have them join their respective teams in the future to lead and drive the adoption of analytics throughout their organizations to promote better and faster decision making.  For now, companies like QueBIT often fulfill the role of Chief Analytics Officer for our clients.  In this respect, our clients consider us their Chief Analytics Outsiders.

In the future I believe every top company will have a Chief Analytics Officer.  The office of the CAO will be every bit as important as the CFO and CEO is today.  Many universities have already realized this and are now offering courses that specialize in the field of Analytics.  The next generation of CEOs will be as familiar and embracing of Analytics as they are today with Strategy and Cash Flow management.  And many of these next generation CEOs will ascend through the role of Chief Analytics Officer.  If you are looking for a career that touches every aspect of a business and prepares you for the responsibility for ultimate leadership of any organization, you won’t go far wrong if you embrace the tremendous opportunity of developing a career that is focused on Analytics.

Organizations that have already made analytics pervasive throughout their organization often achieve this through either a centralized or federated governance model.  With either form of governance there is a clear emergence of the role of Chief Analytics Officer and this role is becoming increasingly important to all companies that currently dream of being the next Apple, Google, FedEx or Amazon.